Why You Shouldn’t Take Cannabis Edibles on an Empty Stomach

Why You Shouldn’t Take Cannabis Edibles on an Empty Stomach

Side effects such as anxiety are more common when edibles are taken on an empty stomach. Can science explain why this happens?

Cannabis edibles – should you take them on an empty stomach or after food? The  most common answer is that you should only take them if you eat first – not unless you want to risk ill effects such as anxiety and paranoia. Yet, no one seems to have a clear explanation beyond an idea that it is ‘absorbed faster’ on an empty stomach. As usual, I turn to science for the answers.

Advice on Whether to Take Cannabis Edibles with Food

It is #4 on High Times‘ 10 Commandments of Marijuana Edible Safety.

Edibles are much more intense when consumed on an empty stomach. Be sure to eat a solid, nutritious meal before taking your THC dose

It is #3 on the Cannabist‘s Eight Tips for Getting Right Dose.

Just envision the sticker on your prescription bottle of antibiotics: TAKE WITH FOOD.

It is #4 on marijuana.com‘s 10 Ways to Ensure Your First Marijuana Edible Experience Goes Smoothly

While eating an edible on an empty stomach will make you feel its effects quicker and harder, it’s an ill-advised tactic.

It seems near universal advice that cannabis edibles should NOT be taken on an empty stomach. It will hit you too hard. The effects will be too intense. Your heart will be racing. You will be paranoid.

Is it really because of faster absorption of THC? Or is it something else?

Unfortunately, I could not find the answers I was looking for. When someone tells me not to do something, I want to know why.

Luckily for us, there was a scientific study looking at the effect of food on absorption of cannabinoids which provided me with some answers.

To understand the absorption of cannabinoids from cannabis edibles, we first must understand a few basic concepts of drug absorption and the effect of food:

Drugs must be in solution to be absorbed. They cannot be absorbed in a solid state. If a drug has low solubility, it will typically take a longer time to be absorbed. THC and other cannabinoids have very low solubility in water since they are highly lipophilic. However, eating a meal causes the gallbladder to release bile acids, which help to solubilize molecules such as THC. This generally increases the rate and extent of absorption.

Permeability is the ability of a drug to cross a lipid membrane. Permeability depends on things like molecule size, charge, and lipophilicity. Higher permeability is better for drug absorption. There are also drug transporters in the intestinal epithelium that affect cannabinoid absorption by pumping them across the membrane, but that is a story for another day.

The Effect of Food on Cannabinoid Absorption

As we know, the pharmacology of cannabis just isn’t that simple.  When discussing the effect of food on the absorption of cannabinoids, we have to include (at minimum):

Let’s take a look at a study performed to test the effect of food on absorption of Sativex spray. Sativex is a cannabis extract with a 1:1 ratio of THC and CBD. Even though it’s an oral spray, most of it ends up getting swallowed anyways, so the results should translate to typical cannabis edibles.

Subjects were administered 4 sprays, which contained a total of about 10 mg of THC and 10 mg of CBD, under two conditions: 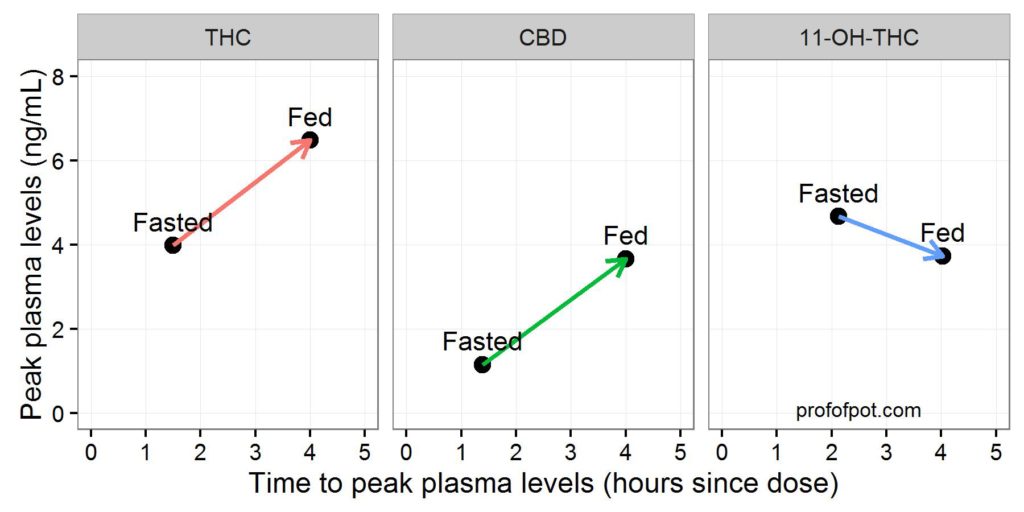 The difference in 11-OH-THC between fasted and fed conditions was less. Although food did delay the time to peak concentrations, the actual levels were otherwise very similar.

Why is Anxiety More Common when Cannabis Edibles are Taken on an Empty Stomach?

I have heard two explanations and I don’t think either of them are supported by the data. I will explain why and then propose an idea of my own.

This hypothesis states that cannabis edibles cause more anxiety when taken on an empty stomach because the THC is absorbed faster. I call bullshit because compared to either fasted or fed, the absorption is 100 times faster when cannabis is smoked. Furthermore, plasma concentrations of THC after a meal don’t lag the fasted state by that much – the time to peak plasma concentrations is only much later after a meal because so much more is absorbed.

Others think that formation of the 11-OH-THC metabolite is responsible. 11-OH-THC is probably more potent than THC. It is true that 10 times more 11-OH-THC can be formed after taking cannabis edibles than any other route such as smoking. However, the peak concentration of 11-OH-THC in the fasted state is only 25% higher than in the fed state. That is not a big enough difference to convince me that 11-OH-THC is the culprit.

My idea is that the anxiety is due to the ratio of THC to CBD under fasted conditions. Although CBD does not block the THC high, it does reduce certain side effects of a high THC dose, such as anxiety and paranoia. Here is a helpful guide to the effects of different THC:CBD ratios.

CBD bioavailability after smoking is about 30%, which is around the same range as THC. The pharmacokinetics of the two molecules are otherwise very similar. So the ratio of THC to CBD in your blood after smoking depends mostly on the ratio of these molecules in the cannabis strain.

Because the activity of 11-OH-THC is at least as strong as THC, I summed the levels of THC and 11-OH-THC for a measure of ‘total THC’. I then examined the ratio with CBD and the results were surprising.

After a meal, the ‘total THC’ to CBD ratio was about 3 at the time of peak blood concentrations. This is already on the high side (no pun intended). However, this ratio after fasting was almost 9 –  nearly 3 times higher than after a meal. 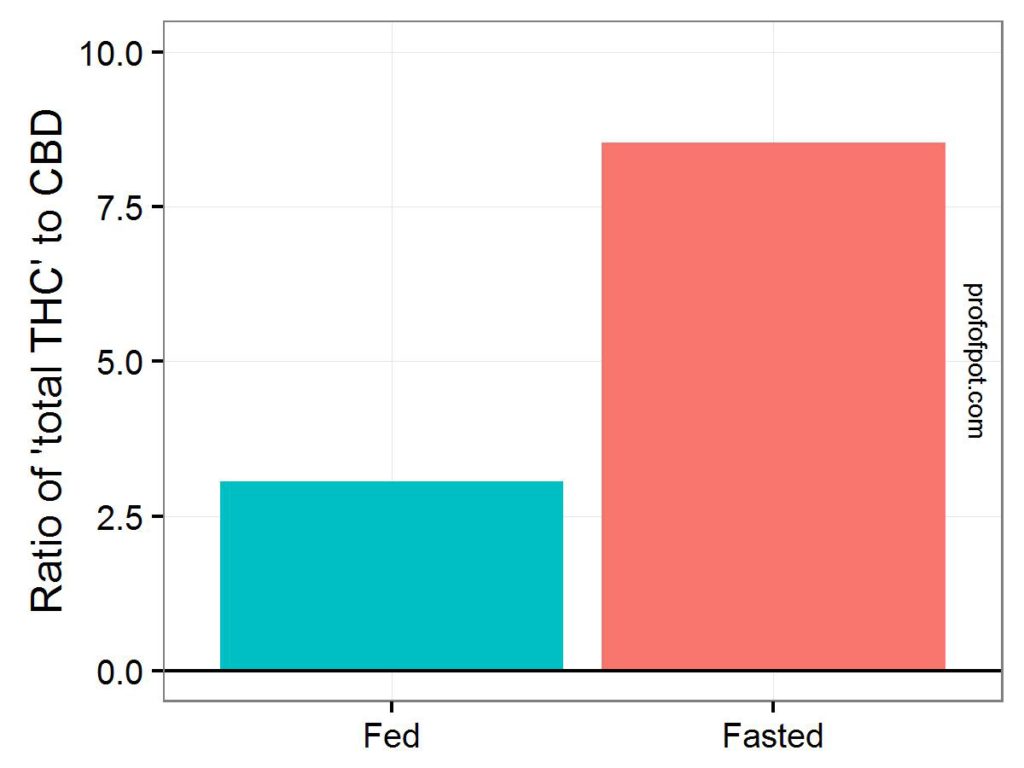 So eating a cannabis edible on an empty stomach, even if it contains a 1:1 ratio, is the equivalent of smoking a cannabis strain with a 9:1 THC to CBD ratio!

It is a good idea to follow the advice from the links at the beginning of this article. Start low and go slow. Take cannabis edibles after a solid meal, preferably one with some fat to stimulate bile acid release. Expect that peak concentrations will not be reached until 4 hours later, although this will be different for everyone.

Taking edibles on an empty stomach may not be an important factor if your edible has no CBD in it to begin with. Of course, if you get the dose right and don’t have any negative side effects, this won’t really matter. However, the variability in absorption makes it hard to get it just right. You might consider tinctures, which have reduced variability in THC absorption.

This study also shows that if you are taking edibles mainly for the CBD content, you should definitely eat a meal first. This can boost CBD absorption 4 times higher.

I think we can lay to rest the idea that the ill effects of cannabis edibles taken on an empty stomach are primarily due to rapid THC absorption or 11-OH-THC formation. Rather, I propose it is due to the relatively low absorption of CBD compared to THC when you haven’t eaten. Of course, let me know in the comments if you disagree.